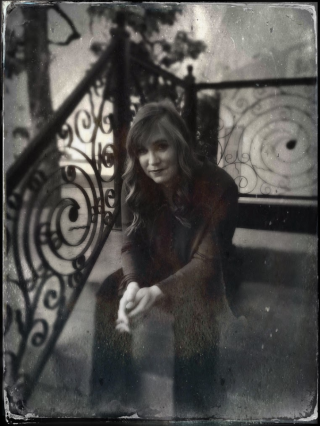 
It's the late 1870s and Silas Cole is a heartbroken journalist who joins a cattle drive in order to learn how to be a real cowboy. He meets a cattle company traveling up the Goodnight Loving Trail in New Mexico Territory. Not only do the cowboys give Silas a very real western adventure, they offer him a spiritual journey as well.

"Poet Mary McCray’s astonishing second book, while reading like a novel, integrates highly crafted poetics. A gorgeous immersion into southwestern landscape, the Primer is as much a spiritual as external journey. Easterner Silas Cole finds camaraderie in the company of the mysterious Coyote, the quiet cook, and gambling cowboys who teach him to reel in his soul as well as the herd they drive. While Silas can “extract the holes of bullets” and “save them like buttons”, he ultimately learns "nothing but earth wants your bones.” This is a gritty and lyrical narrative I could not resist." — Ann Cefola, annogram

"Like all good poets, McCray takes us on a journey, from sunup to sundown, East to West, all while singing Taoist prayers to the tune of Rawhide. It's delicious. Read this book." — John Lehr, star of the Hulu series Quick Draw

"Mary McCray's portrayal of the area is a true depiction of the historical landscape, the barren landscapes full of dry ditches and crevices, the oceans of grass, and the unpredictability of water. This is the real Fort Sumner. These poems take me to the places I read about in the archives every day." — Aaron Roth, Historic Site Manager, Fort Sumner Historic Site & Bosque Redondo Memorial

More about the book, including a reader's guide and traveler's guide.

"The influence of narcissism on today's pop culture has warped the way people interact. The author's commentary was smart and relevant. It caused me to think about the way I treat other people. Even as I criticize vapid, self-aware narcissism, I'm sure I still act that way out of a desire for validation. Like they say, 'everybody wants to be special.' If I was a college professor, I'd have my students read this book. It provides a good lesson in humility."  — Joshua Ebert on Smashwords

More about the book, including bonus discussion on writing strategies and narcissism. 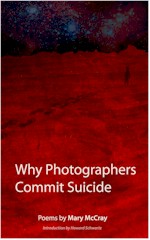 Finalist in the 2013 Indie Excellence Awards

Why Photographers Commit Suicide explores, in small narratives and lyrical poems, the American idea of Manifest Destiny, particularly as it relates to the next frontier—space exploration. Mary McCray examines the scientific, psychological and spiritual frontiers enmeshed in our very human longing for space, including our dream of a space station on Mars. These poems survey what we gain and what we lose as we progress towards tomorrow, and how we can begin to understand the universal melancholy we seem to cherish for what we leave behind, the lives we have already lived. McCray unearths our feelings about what it means to move ahead and stake out new territory, and what it means to be home.

"Remember when, in Carl Sagan's Contact, the main character said "They should have sent a poet?"  Now we have. In a skeptical age, it is extraordinary that we still have dreamers. Mary McCray is one of the best and brightest.  From the great Tharsis volcano on Mars to Olympus Mons, these poems are a celebration of what is best about humanity's exploration of the planets. We are moving out among the stars, and Mary McCray is leading us there."  — David H. Levy, astronomer and author of The Quest for Comets and David Levy's Guide to the Night Sky

"What a surprise! Poetry that rightly deserves the praise, by which I mean poetry that makes you forget you're reading poetry. How refreshing. For far too many American poets, their poems are a glitter of self-consciousness--the facile of the MFA crowd. This new collection by Mary McCray should earn her a wide readership with its outer space leaps of invention. Her ribald sense of humor. Grit. Originality. " — Tom Crawford, Author of The Names of Birds, Wu Wei, and The Temple on Monday

"...a book of poetry for our times...it leads us to the existential abyss, prickling our fears and anxieties...Here we have stars and planets personified, acting out the baser human emotions and acts of lust, lost love and betrayals, dealing with their own fears and anxieties about loss and the ultimate end...Her language is rich and daringly playful, and her sense of poetic rhythm is excellent...If a poet can strike upon the heart, the mind, and the ear all at the same time, then the poet is getting the job done."  — Devin McGuire of the Aurorean

St. Louis expats, Mary (Ladd) McCray and Julie Wiskirchen, met in graduate school at Sarah Lawrence College in 1995. While there, they came across a haiku about the Gateway Arch, written by a grade school student, and they were inspired to try the art form themselves. Some of these haiku are biting, but Mary and Julie wrote them with genuine love for their hometown.

This first edition of St. Lou Haiku was handcrafted. The 12 pt. Garamond Old Style type (with 14 & 18 pt. for display & Post wooden type for cover) was handset. Printing was done on a 6 X 10 C&P handpress. The paper is Wausau Royal Linen with Royal Silk scarlet endpaper. The cover and title page use some Post (as in Saturday Evening Post) italic wooden type the publisher was given by the son of a deceased printer from Collinsville, Illinois.

The zinc-cuts from Clarence Wolfshohl's 4 original St. Louis illustrations were made by the Augustine Company of Marshalltown, Iowa.

All design, artwork, printing and binding were done by Clarence Wolfshohl during spring and early summer of 2004 at Timberline Press, Fulton, Missouri.